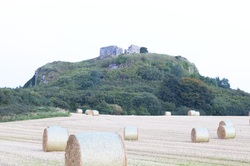 The Rock of Dunamase.
This hill of hard limestone rock (about 60 metres above ground level) was marked on a map by Ptolemy in the 2nd century. It was called 'Dunum'. In Celtic Ireland, it was known as Dún Masc, the fort of Masc. Masc was a grandson of the King of Leinster. In 843, Dunamase was plundered by the Danes. In the 12th century, it belonged to Dermot Mac Murrough, King of Leinster. He was the man who invited the Normans to Ireland. After the Norman Invasion in 1169, Richard de Clare, Earl of Pembroke (known as Strongbow) married Dermot's daughter, Aoife, and inherited the castle. In the 14th century, it was taken over by the O'Moores and, for the next two hundred years, the Irish and English fought over it. The O'Moores were the most famous Laois family and, even today, Laois is sometimes called 'The O'Moore County'. In 1650, Dunamase was destroyed by Oliver Cromwell's colonels Hewson and Reynolds. Today the castle is in ruins as depicted in our photo.