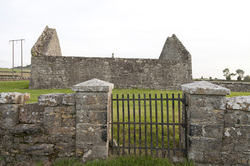 Killenny Church
Killenny Church marks the remains of the ancient parish of Killenny. Early historians attribute the name to Cill Eithne, the church of St. Eithne however in more recent times it has been suggested that the name may derive from Cill Aenaigh, the church of the place of assembly. Such an explanation would tie in with the common practice of early Christian churches being established where people gathered given the absence of towns and villages.
The remains of the church and its graveyard can be seen on Bobby Young's farm behind the current Catholic church. The parish of Killenny was always a small parish with 121 inhabitants recorded in 1831 and 154 in 1841 living in twenty five houses. The Church of the Assumption replaced this old church.
Scoil an Fhraoich Mhóir, The Heath, Portlaoise, Co. Laois            Phone:  057-8646658                   Email: office@theheathns.com
Proudly powered by Weebly