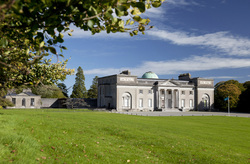 Emo Court.
Work on this fine mansion (designed by the famous architect James Gandon) was started by the 1st Earl of Portarlington around 1790, but it wasn't completed until 1860, when the huge copper dome (known as a rotunda) was added. In 1930 the house was sold to the Jesuit Order of priests who used it as a seminary. The well-known Irish writer Benedict Kiely spent a short while there in the late 1930's. In 1969, it was bought and beautifully restored by Mr Cholmley-Harrison. He later sold it to the government and it is now run by the Board Of Works. Each year thousands of people come to admire the house and walk around the lovely gardens. Sometimes classical music recitals and poetry readings are held there as well.