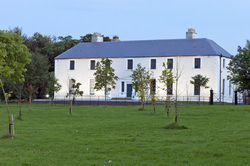 It is believed that this big house was built in 1727 by Warner Westenra whose family came originally from Holland. Since then, the house has had at least a dozen different owners. These are the family names: Saunderson (1765-1771), Burdett (1771-?), Gore (1804), O'Reilly (1804-1864) and Wall (1864-1880). The famous Gaelic scholar and placenames expert, John O'Donovan(1806-1861) was friend of Myles O'Reilly and, at one stage, he spent six months in Heath House recovering from an illness. In 1880, the house was bought by Charles Blake who came from County Mayo. His family made it very famous as a racing stable. Many horses trained there won important races in Ireland and England. Colonel A.J Blake was Leading Trainer in 1930, 1931 and 1938. The Blakes eventually left Heath House in the early 1960's and the house was bought by a Dublin architect and writer named Uinseann Mac Eoin. The house again changed hands in recent years and its new owners the O'Connell Husseys have totally renovated the house bringing both it and the grounds back to their former glory.